Since its market launch in 2014, the proven GEKKO highend phased array instrument from KARL DEUTSCH has remained virtually unchanged in terms of design. After six years, it was now time for a new look. The modernized design also makes the device more compact and lightweight. But considerable improvements have also been made on the technical side: In earlier times there used to be only one standard model, now there are a total of eight different versions. This means that the appropriate model can be found for every customer’s need. The original version of a 64:64 configuration was supplemented with a 32:128 and 64:128 architecture. Optionally, all three versions are also available with TFM (Total Focusing Method). The flagship is the GEKKO 64:128PR TFM 128, which provides realtime TFM with 128 channels. In addition, the memory capacity of the new GEKKO has been doubled, a USB 3.0 port has been added and a WLAN interface has been implemented. In addition to other new features, the latest software now also includes Plane Wave Imaging (PWI), which enables highenergy and extremely fast scans in TFM quality. The economical alternative: MANTIS, the little brother of the GEKKO, is similarly powerful but much more compact. 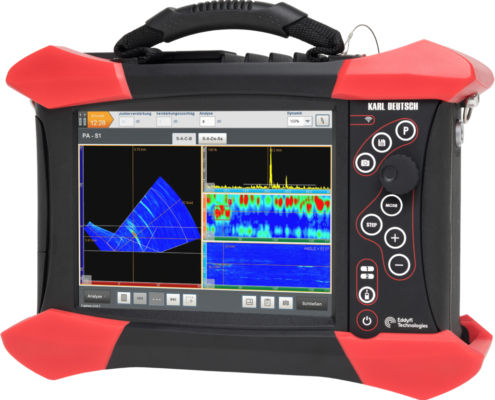 Phased Array Testing at our Customer TMK-ARTROM
Scroll to top